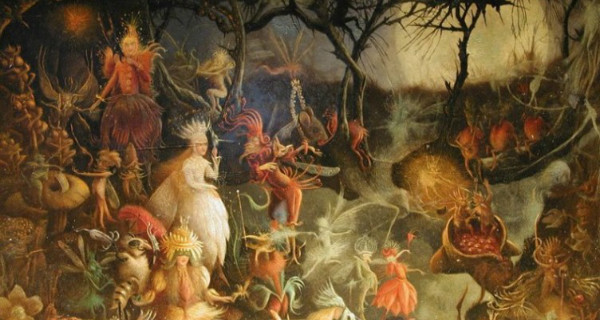 Introduction
In this study, we're going to peer into the history of a beloved "holiday" around the world and critically examine some of it's most popular and "fun" traditions.
Read this short paragraph on Halloween, found at the History Channel's website:[1]

Evolving from the ancient Celtic holiday of Samhain, modern Halloween has become less about literal ghosts and ghouls and more about costumes and candy. The Celts used the day to mark the end of the harvest season and the beginning of winter, and also believed that this transition between the seasons was a bridge to the world of the dead.  Over the millennia the holiday transitioned from a somber pagan ritual to a day of merriment, costumes, parades and sweet treats for children and adults.

While the holiday has always been associated with "literal ghosts and ghouls," we'll learn that even seemingly "harmless" activities like "trick-or-treat" and "fun" costumes of this day have pagan roots. In other words, despite what History Channel, your parents and grandparents, or even "pastor" will tell you, it isn't all fun and games.
What Pagans Say
First, let's look at the significance of the date and what the Celts (and others) looked forward to. As I'm wont to do, I'll provide commentary throughout all segments when necessary. Now, consider what this first writer says:


Possibly the biggest festival of the Witches’ year, Samhain is a time to remember those who have passed on, celebrate the Summers end and prepare for Winter months ahead. The Sun God and earth fall into slumber, as the nights lengthen and winter begins.[2]

Do you remember what the Bible says about witches? It seems they've--present tense--a very special day coming up. Why do we (again, I am primarily speaking to professing Christians) assume these "ancient pagan festivals" are no longer celebrated as such? Or, worse yet, turn a blind eye and even try to adapt it to our liking?

But notice another aspect brought into the conversation by the writer of this article. They write, "The Sun God and earth fall into slumber..."; now, compare that with what the Bible says about the host of heaven:

Thou shalt not sacrifice unto the LORD thy God any bullock, or sheep, wherein is blemish, or any evilfavouredness: for that is an abomination unto the LORD thy God. If there be found among you, within any of thy gates which the LORD thy God giveth thee, man or woman, that hath wrought wickedness in the sight of the LORD thy God, in transgressing his covenant, And hath gone and served other gods, and worshipped them, either the sun, or moon, or any of the host of heaven, which I have not commanded; And it be told thee, and thou hast heard of it, and enquired diligently, and, behold, it be true, and the thing certain, that such abomination is wrought in Israel: Then shalt thou bring forth that man or that woman, which have committed that wicked thing, unto thy gates, even that man or that woman, and shalt stone them with stones, till they die.
Samhain, (pronounced SOW-in, SAH-vin, or SAM-hayne) means "End of Summer", and is the third and final Harvest. The dark winter half of the year commences on this Sabbat.

Various other names for this Greater Sabbat are Third Harvest, Samana, Day of the Dead, Old Hallowmas (Scottish/Celtic), Vigil of Saman, Shadowfest (Strega), and Samhuinn. Also known as All Hallow's Eve, (that day actually falls on November 7th), and Martinmas (that is celebrated November 11th), Samhain is now generally considered the Witch's New Year.
We can readily see, if we take to study, that everything related to Samhain (Hallow's Eve) is wicked and abominable. In referring to the sun as a god, the wiccans in this article[3] expose an aspect of the holiday many are ignorant of.

Let's now begin to inquire about some of the seemingly harmless and more commercialized aspects of this "ancient Pagan" holiday.
Consider now this entry of Samhain in Encyclopedia Britannica:[4]

Samhain, ( Celtic: “End of Summer”) also spelled Samain, in ancient Celtic religion, one of the most important and sinister calendar festivals of the year. At Samhain, held on November 1, the world of the gods was believed to be made visible to humankind, and the gods played many tricks on their mortal worshippers; it was a time fraught with danger, charged with fear, and full of supernatural episodes. Sacrifices and propitiations of every kind were thought to be vital, for without them the Celts believed they could not prevail over the perils of the season or counteract the activities of the deities. Samhain was an important precursor to Halloween.

These gods needed appeasement, and one way the Celts did this was with various sacrifices, both animal and even possibly human. The gods also were said to play tricks on the people, and it's believed that the Celts would dress up in costumes resembling the devils (gods) to trick them. This is a root of "trick-or-treating" and the costumes we think are harmless. No, they weren't dressing up as their favorite heroes and TV characters, and so forth, but they did don costumes for that festival. Now, I know what many are thinking: "Well, I don't dress up to ward off evil spirits." But that's far from the point. The point is that the seemingly harmless fun you're having on that night has deep pagan roots, and that is what the Lord in heaven cares about.

From October 31 to November 2, the Celts celebrated a 48-hour festival, the Vigil of Samhain (pronounced “sow-in”). They believed that Samhain, the pagan lord of the dead, assembled the souls of those who had died during the previous year and decided what form they would take for the next year. The souls would either pass on to human bodies or would be condemned to live within animals (the most evil of the bad souls or spirits would take the form of cats). Hoping to coax Samhain into giving lighter sentences, the Celtic worshippers tried to bribe him with gifts and prayers.

Bribery, gift giving--could that be where the tradition of trick-or-treating came from? Here's more:

First, they extinguished the cooking fires in their homes. Then the Druids (Celtic priests) met on hilltops in the dark oak forests (they viewed oak trees as sacred), and built huge sacred bonfires to frighten away evil spirits and to honor the sun god. Next, the people would burn crop and animal sacrifices to their gods, dancing around the fires as the “season of the sun” passed and the “season of darkness” began. The Celts wore costumes of animal heads and skins, and told each other their fortunes.

You can't make this up. This is what happened in the past, and this is what pagans still do today! Of course, while the good "Christians" are going door-to-door getting Snickers bars, or hosting "Trunk-or-Treat" events in their church parking lots, the heathen are, under cover of darkness and deep in the woods, practicing the deeper, more nefarious aspects of their holy day.

Even the fun and also competitive game of "bobbing for apples" has a sordid beginning, as noted from the same scg.org article:

Pomona Day, celebrated on November 1, was a festival held in honor of Pomona, the Roman goddess of fruit, trees and fertility. Her sacred symbol was the apple.

Over the next three centuries, the customs of the festival of Samhain mixed with the practices of Feralia and Pomona Day. That is, until they were “white-washed” and “cleansed” by another religious power.

The apple was introduced by another pagan culture (Romans), and the tradition behind it was whoever was first to bite into the bobbing apple would be the next to marry. Fertility rites and ceremonies plague heathen festivals and traditions, and should absolutely be avoided, not mimicked, by believers!

The black cat is one that is used as a common Halloween decoration. This particularly colored cat is stigmatized by those who're superstitious (bad luck if it crosses your path). But, there's a reason the black cat is so popular around this time of year. On a website, witcheslore.com, a writer of an article on the black cat says, "The cat familiar is a companion to a witch..." Remember, we as believers aren't to regard those who have familiar spirits. Now, this doesn't mean you can't own a black cat (I actually have one). What this does mean is that witches believe cats are familiar spirits, and the Celts believed spirits inhabited animals, especially around this time of year. For this reason, certain animals are targeted for ritual animal sacrifices.

Cat myths first began in ancient Egypt, they were worshipped as the embodiment of the gods. The stories of cats soon reached Greece, Asia and the rest of Europe and they became synonymous with witches, though at the time it was thought that the cats were sent by devils to help witches with their evil workings.

To be certain we're talking about "cats" in general, we will continue reading what this author has to say: You will learn almost everything about magic from talking to your cat, and using a cat in your magic will double any spell’s power. If you are speaking secrets you can be utterly certain your familiar will not betray your trust.

So, it may not even be that the cat is "inhabited" by a spirit, but it seems they believe the cat itself is the familiar. So, think twice before you hang Halloween black-cat decor around your home and outside if you don't want to invite devils in. It should be evident that by decorating with these images, you're promoting the beliefs and superstitions behind them. Why would you flirt with wickedness?
Conclusion
If you read this and are thinking to yourself I just went overboard and am "legalistic," then I encourage you to re-read it and perhaps do more research yourself. Ultimately, you're going to bear the burden on judgment day; I've done what I can to forewarn you.

In the next study of this series, we will look at how Roman Catholicism hijacked (as usual) these pagan customs and created their own "Christian" holydays that many celebrate today. Certainly, you may say it is Christian, but when you get to the root of it, it's pagan.
__________
[1] https://www.history.com/topics/halloween
[2] wicca.com
[3] Deuteronomy 17:1-5
[4] https://www.britannica.com/topic/Samhain