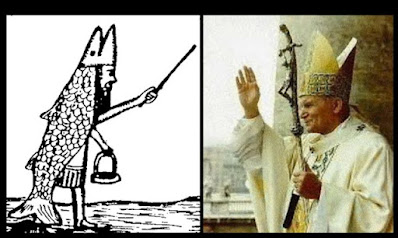 The title "Supreme Pontiff" (Pope) is a title fit only for Antichrist. In a post by Christopher Heffron of “Franciscan Media,” we're given some insight about the relationship between paganism and Catholicism. Understanding this is essential to understanding the many doctrines that are unique to the “Holy Church.” Below is the entire post. I'll provide the link at the end so you can see that I'm not making this up.[1] This is an admission from their own mouths! Heffron notes the following:

In A Concise History of the Catholic Church (Doubleday, revised and expanded edition), the author, Father Thomas Bokenkotter, writes: “At first Constantine observed an attitude of formal correctness toward paganism. He remained its Supreme Pontiff, paid homage to the sun god on the official coinage and in general was careful not to alienate the pagan masses and aristocracy of Rome.”

According to Webster’s New World College Dictionary, the definition for the pope is “supreme pontiff.” Why is that?

After Christianity was legalized under the Emperor Constantine (313), it became the state religion within 100 years. Adopting a title coming from Roman paganism became feasible then. Applying this title to the bishop of Rome, the successor of St. Peter, seemed appropriate.

In short, when Constantine “converted,” he did very little to actually Christianize the pagans. In fact, it was the other way around. The old pagan title “Pontifex Maximus” would eventually be what we know as “Supreme Pontiff” or “Pope.” Throughout history, these Catholic “Bridge Bilders” followed in Constantine’s footsteps: they did not call pagans to repentance, they adopted pagan practices. This is still true today, even in Protestant churches: relativism is king.

What I've been attempting to do is highlight the undeniable and searchable facts relating to Catholicism as it relates to two very important points of doctrine that most of “Christendom” has fallen for, which is the Trinity and Sunday worship. The entire backdrop for these two well-beloved “essentials” in the mass of evangelicalism is entirely pagan. Franciscan Media has admitted it, and these things are relayed throughout the official Catechism of the Church and their literature.[2] Yet, researchers such as myself, who dare delve into the history of these things, are stiff-armed. We're told that history is unnecessary, our hermeneutics are sorely lacking—worse yet, I have been called a cult leader. But the reality is that the real dangerous cult is comprised of those who're told that any questioning of these things is “heresy” and unnecessary and on the fringe.

God’s people are destroyed for lack of knowledge. If Scripture is going to be one’s only source of faith and practice, it would help to at least read the Scripture with historical context in mind. Even if your elder/ pastor is unmovable in his convictions, if his convictions don't square with the Bible, then what he has are “commandments of men” and “traditions of the elders,” which Christ himself warned against.