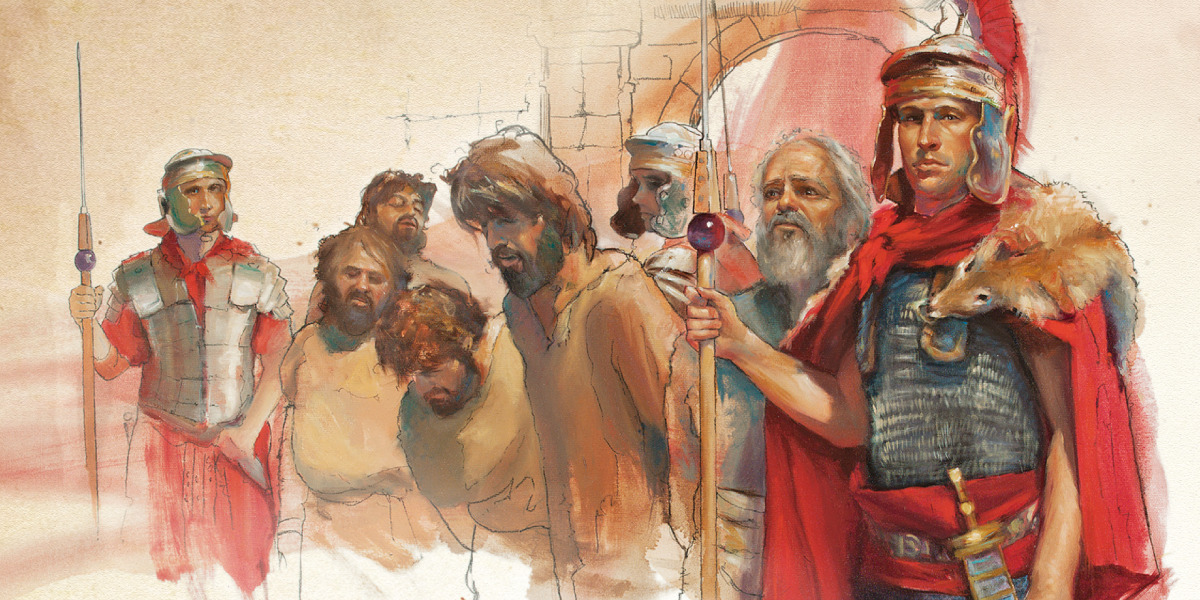 When it comes to the debate about whether or not Christians should use self-defense or serve in the military/ police forces, proponents will often cite the soldier that came to John the Baptist,[1] or the centurion of “great faith,” who interacted with Jesus.[2] They’ll also refer us to Peter’s interaction with Cornelius.[3] These three instances, they say, support believers service in the military/ police force (or allow for self defense). After all, “There’s no explicit rebuke and command to leave their occupation.” Or is there? Let’s start with John the Baptist.

John and the soldiers

John’s interaction in Luke chapter 3 is as follows:

And the soldiers likewise demanded of him, saying, And what shall we do? And he said unto them, Do violence to no man, neither accuse any falsely; and be content with your wages.

It’s assumed that because John told them to be “content” with their wages that they were free to continue in their line of duty. However, proponents of “Christian” military and police service/ self defense are only quoting part of the verse. John said that soldiers should do three things: 1) do violence to no man, 2) accuse nobody falsely, and 3) be content with pay. Stipulations 2 and 3 are the easier of the three for service personnel to follow, especially today with the benefits that come with enlisting, such as the G.I. Bill and other college opportunities; there’s also guaranteed healthcare/ income, travel opportunities, etc. This is what attracts young recruits in the first place! But the first, most over-looked stipulation made by John is, “Do violence to no man.” It’s interesting that John would lead with that stipulation. This suggests this is his primary concern.

Consider this: there’s a great chance that service personnel are going to be faced with a threat of violence, which puts them in a position of using force/ violence in self defense or the defense of others. Why else are they equipped with weapons and trained to use them? They are given a license to kill if necessary. Let’s assume the odds are at least 50 percent. This violates John’s first stipulation. This would also contradict Jesus’ command to turn the other cheek and to love one’s enemy.

We can apply excuses all we want: “Some branches of the military see more action than others,” or, “These people are just doing their jobs like anyone else.” Or, the famous, “In the Old Testament…” (surprisingly referred to by many who would otherwise disregard it). Whatever line of reason you want to use to justify military/ police service, you have to consider John’s stipulation and ask whether or not violence is being justified by him—it isn’t. And not only do you have John’s stipulation—mind you, this is pre Sermon on the Mount.

This last statement is an important detail to note. In debates I’ve heard between Christian pacifists and Christian non-pacifists, many Christian pacifist default to a weak dispensationalist position: “John was before the sermon on the mount, so that’s why he didn’t really address the issue of violence with the soldiers.” But by simply turning to the interaction in the Gospel of Luke, we can see that both are missing the simple context. John said don’t do violence. Is it really that simple? We have more witnesses.

How many times does he have to say it?

When it comes to the rest of the interactions—between Jesus, Jesus’ disciples, and agents of the state—we should ask, “How man times does he have to say it?” By the time we get to Matthew 8, we’ve already been given the Sermon on the Mount. Therefore, what’s good for the listeners of that glorious sermon is good for the rest of us. How many times does Jesus have to say to turn the other cheek or to love one’s enemy?

But let’s play the game our opponents want. First, Jesus didn’t have to tell the man to leave his post. His statement of him having great faith isn’t a validation of his occupation. The lesson from Jesus’ interaction with the soldier is this: the man understood commands and orders because of his experience, so he had faith to know that whatever Jesus said would be accomplished. This is in contrast to the many unbelieving Jews—the “people of God”—Jesus was constantly at odds with. To read anything else into Jesus’ affirmation of the man’s faith (not occupation) is to contradict what Jesus said prior: “turn the other cheek.” It’s very reasonable to assume that had the solider actually chosen to follow Jesus that he would’ve by necessity had to leave his post as a soldier. After all, Matthew left the tax booth! Have the faith not the occupation.

The same assumption can be made about Cornelius. Remember that Peter himself was rebuked by Jesus for drawing a sword to defend the most innocent person. But the most innocent person is said, essentially, “All they that live by the sword shall die by the sword.”[4] Why would we assume Peter wouldn’t expect a sword-bearing agent of the state to live differently after he’s baptized as a believer? Did Peter learn the lesson or not? Maybe you can ponder that later. For now, let’s move a little further into history. I think history will also testify to the expectation many leaders of churches in the first centuries had concerning this very issue.

Where do we get this notion that it was expected for new converts to be non violent—how about the mature disciples? First, from Jesus. Second, from his apostles. Third, from those who descended from them in the first few centuries after, even until now. We could consider many quotes from many different centuries, but we’ll focus on the First.

We who formerly murdered one another now refrain from making war even upon our enemies. We used to be filled with war, mutual slaughter, and every kind of wickedness. However, now all of us have, throughout the whole earth, changed our warlike weapons. We have changed our swords into plowshares, and our spears into farming implements.[5]

I do not wish to be a king. I am not anxious to be rich. I decline military command.[6]

Perhaps for some readers, it’s far too easy to discredit these two witnesses because they were, or are, deemed “heretical” in some sense, for whatever reason that could be conjured. But this doesn’t change the fact that the dominant view was non violence. I remind you that I could present quotes similar to this,[7] even well into the Dark Ages where we find the Anabaptists as they became known.

John said soldiers are to do violence to no man. The take-away is that if someone finds themselves in an occupation that validates violence, they must at once question whether or not they can truly serve Christ there. The implication is that they’re to repent and leave. Jesus’ Sermon on the Mount only underscores this fact. In reality, even if John the Baptist—or even the later disciples—seemed to contradict Jesus’ words, we would do well to obey Jesus and nobody else because nobody else made it as plain, simple, and uncompromising. There’s ultimately no excuse. Do no violence.