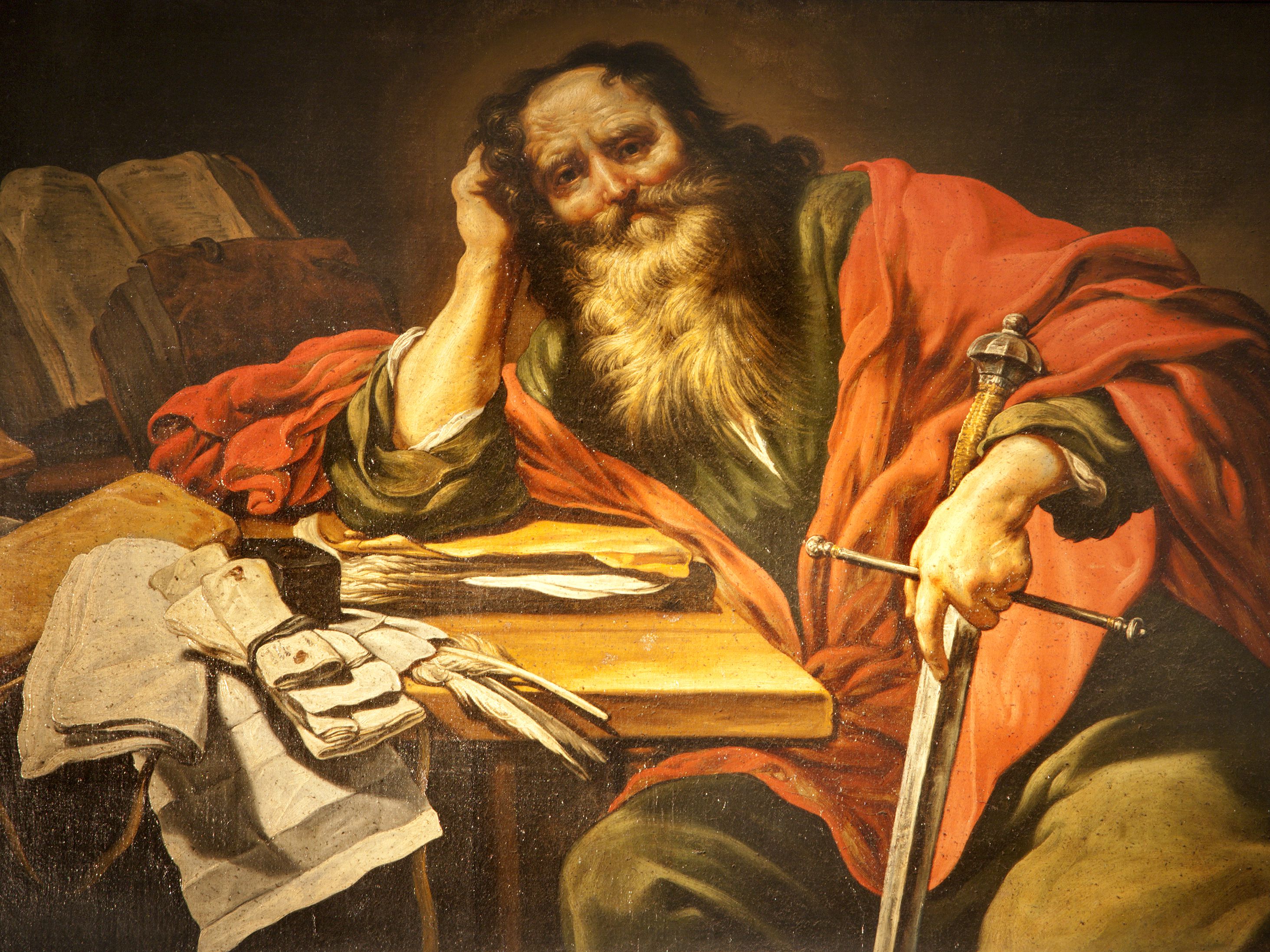 One of the things that attracted me to Anabaptism was the emphasis on Jesus' words only. Truly, the Anabaptist movement sought to radically reform approaches to theology, and that meant getting back to the historical, apostolic basics. It was an effort unlike the other Reformers to have a true New Testament faith and practice.

This love and desire of mine has meant I've questioned a lot of mainstream "orthodoxy" in my attempt at "reforming" Babylon. My steps have taken me far afield from Protestantism. I've rejected Trinitarian and Sunday keeping as a result, among many other things. In my research, I've come to also reject the so-called apostle to the Gentiles, Paul.

You might disagree with this view of mine.[*] But it wasn't uncommon for Anabaptists to be skeptical of Paul, given that they placed a far-greater emphasis on Jesus than most others. Perhaps there'll be another post on one Anabaptist minister known for his Anti-Paulinian views.

What follows is borrowed from another fantastic site that points people to Jesus' words and away from Paul the false apostle. All the author's original links to unique articles featured on his site are kept!

Proofs that Paul did not truly Meet Jesus outside Damascus

We have written several articles that state individual examples of what proves Paul did not meet the true Jesus outside Damascus. It was an imposter. Now we will collect all these individual proofs in one article so you can see the collective force of the strength of the position we have previously taken.

In logic, you can know you have reached the correct conclusion when the evidence from multiple angles all independently point to the same conclusion. Thus, by combining all these proofs in one article, you can more clearly see the unassailable nature of this contention.

Jesus warned in his talk to the apostles at the Mount of Olives that after He ascends to heaven, many imposters will come in his name saying they are Himself, but do not believe them if someone claims to have seen Him return from heaven just in a wilderness place or in a private room. Jesus says the distinction of how He will reappear on earth is that when it's truly him every eye will see Him from every point East and West. See our article on Matthew 24:5 to 7, 23-27.  Paul in Acts 9:1-11 in the wilderness outside Damascus met someone saying "I am Jesus." Those with Paul saw no one but heard the voice. This fits Jesus' warning to a tee about a false return by Jesus from heaven prior to the Ascension.

Immediately after Paul's experience with someone saying "I am Jesus,"  Paul wanted to go to Jerusalem to try to see the apostles. But the Jesus whom Paul met outside Damascus appears to Paul in a trance (recounted in Acts 22:17) who tells Paul to depart from Jerusalem because the church there -- the 12 apostles in context -- will not believe Paul truly met Jesus. But this makes no sense if it were truly Jesus, because Jesus could always speak through the Holy Spirit to the 12 to tell them that Paul is truly a follower of the true Jesus. Only a false Jesus would ever tell Paul to not go to Jerusalem because the 12 would not believe Paul's story. A false Jesus would not want Paul to talk to the 12 apostles because they would give him the imposter criteria which the true Jesus gave them that would have clearly excluded the possibility that Paul had met the true Jesus outside Damascus. So in this instance Paul departed Jerusalem, and never was explained the sign of the Son of Man coming on clouds of glory which would have let Paul realize he was being duped by a false Jesus. See articles (1) Paul's Trance; (2) Odd Message of "Jesus' in Paul's Trance; and (3) Paul Did Not Know the Son of Man Prophecy Which Would Have Protected Him.

As we explained in our article on the importance of Paul not going to meet the 12 early on, Paul never heard the Son of Man criteria which filters out the Jesus whom Paul met as false. We wrote:

Paul himself admits this at the time he wrote Galatians more than 20 years after becoming a Christian. Paul said he declined to listen to the twelve apostles, preferring instead his direct revelations from the Lord Jesus whom he met during that first experience. In Galatians 1:12, Paul explained: "I did not receive it from any man, nor was I taught it; rather, I received it by revelation from Jesus Christ." In Galatians 2:6, talking of the twelve apostles, Paul says:

But from those who were reputed to be somewhat (whatsoever they were, it maketh no matter to me: God accepteth not man's person)-- they, I say, who were of repute imparted nothing to me: (Galatians 2:6 ASV.)

Would the true Jesus have inspired the following blasphemies that we find clearly in the writings of Paul?

1. God supposedly will send a delusion on people to believe a lie and remain lost, when the true Jesus says that God will seek out the lost sheep to bring them to salvation. See Paul's Words Supporting Blasphemies.
2. The rulers of this world are agents of God, and whoever rebels against their commands "rebels against God." (Romans 13:1-5) But the true Jesus taught they are under the dominion of Satan. See Satan's Domain over World Rulers.
3. The Law is so thoroughly abrogated that there's nothing unlawful in itself, but there are only things inexpedient to do. This is a terrible immoral principle that undermines all morality. See Are These Immoral Teachings in Paul's Writings?

As a result, Paul contradicts Jesus' three statements to his church not to eat meat sacrificed to idols, and instead Paul says that it is permissible to eat such meat unless it is inexpedient to do so such as when you're in the presence of someone who is weak about this issue and believes he truly should not eat meat sacrificed to idols. See Paul's Contradiction of Jesus on Eating Idol Meats.

And on the same rationale that expediency is the test of right and wrong, Paul taught that he knows every day of the week is the same, so that there is no particular day of rest. Thus, if you want to rest, don't worry about resting on the day of rest - the Sabbath - in the 10 Commandments. Paul said if you do rest on Sabbath to satisfy a command you think affects your salvation to disobey, you are "severed from Christ." Paul specifically told Gentiles with this attitude they lose their salvation by resting on Sabbath.  Paul said this even though the Law given Moses said Sabbath rest applied to sojourners (Gentiles) in the gates of any Israelite city. Paul thereby damned all Gentiles who followed Paul to disregard Sabbath because Sabbath is the one command that God consistently said not only in the Law but in the prophecies about a new covenant that the Gentiles must obey as a condition of their salvation. See Paul Abrogates the Sabbath Command.

Approximately 21 years after Paul became a believer in Jesus, he went to Jerusalem, even though a prophet Agabus and other believers speaking through the Holy Spirit, according to Luke, told him not to go to Jerusalem. On this trip, Paul's traveling companion defiled the temple by entering it in an uncircumcised state. In this instance, why didn't the true Jesus who Paul supposedly knew tell Paul that these other Holy Spirit messages were indeed to be obeyed? If Paul were truly in such normal contact with Jesus, how could Paul disobey the Holy Spirit in this way? See our article on Trophimus.

When Paul is being afflicted by a stinger sent by an Angel of Satan, he asked the Lord to release him from it. But supposedly the Lord -- apparently either Yahweh or Jesus -- Paul does not specify -- said "my grace is sufficient for you."

Why would the Lord God or Jesus leave Paul subject to the dominion such a stinger from an Angel of Satan represented? Wouldn't only a false god or an imposter Jesus serving Satan leave Paul afflicted by Satan's stinger?  See our article Why Would Jesus' Not Remove An Affliction of Satan upon Paul?

Paul is endorsed by the influential and popular demon, the Python priestess at Philippi in Acts 16. She specifically endorses his "plan of salvation."    Paul lets this go on for several days without interrupting her before casting the demon from her.  See our article The Python Priestess Endorses Paul.

Why would a popular demon spirit of Python endorse Paul if he was a representative of the true Lord Jesus Christ?

This would represent a kingdom divided against itself. Thus, it logically follows that this could not possibly be the true Lord Jesus who Paul followed and was teaching a plan of salvation approved by demons. We are forced to ask: who gave Paul the plan of salvation which the demon endorsed? The answer is obvious.

There are many more such proofs, but these are the top seven. Hence, when multiple angles point to the same conclusion -- that Paul did not meet the true Jesus Christ -- we can with confidence conclude that is the truth. This means Paul met an imposter Jesus outside Damascus in the wilderness, as warned by Jesus in Matthew 24:4-5, 24-27.