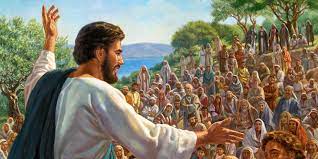 It's "Easter" season. In the past, I've posted a series on the subject. It's currently unavailable as I edit and update the content in preparation for another book.

Ive been sitting on the following for a while, but I feel led to share this now. Consider this the first in a short series on the "Easter" holiday for 2022.

The Messiah is a man

Here’s a passage that stood out to me in my daily readings:

But when the multitude saw it, they marveled, and glorified God, which had given such power unto men.[1]

In this passage, the believing Jews rightly discern that forgiveness of sins is granted by God to be something men can do.

Forgiveness portrayed in the Gospels

Now, read the following, which was a list I‘d begun compiling some time ago on the idea of whether men have power to forgive sins, because many times it’s assumed by those who believe “Yeshuah is God”  that men can’t forgive sins, “only God can.” Usually, these folk are Trinitarian. What we'll see is that God expects men to actually forgive the sins of others in order to have their own forgiven. The divine importance of forgiving another human being is inextricably related to one's salvation and standing before the Father.

Yeshuah was the agent of God, acting and speaking on God's behalf. Who God forgave, Yeshuah forgave. So we say rightly that Messiah and Savior of God's people is simply the messenger of that message and therefore becomes the one identified in it. Ultimately, two agents are involved: one is the sender, one is the sent. Both have the message, but one is merely delegating it. The wonderful reality is that he's delegated this honor to those who follow him in Kingdom living. But with this wonderful task comes awesome responsibility.

What did this have to do with "Easter"? This topic is of utmost importance when we look at the stake[2] and the tomb. He is risen. But the question is who is risen and what's the significance of his rising? There are essentially two opposing theologies centered around who Jesus is, and when there's attempts to mix them, you enter idolatry. Those celebrating "Easter" today have a Jesus who never died for forgiveness of sins and who therefore never rose again. The Trinitarian understandings of Jesus don't work. It's a pagan holiday for an imaginary god. So why would someone with a correct understanding of Yahweh and Yeshuah celebrate the pagan fest and affirm parts of their faulty narrative?

How can we say, “Men can‘t forgive sins” when we have Yeshua saying we can and should? Mind you, Yeshuah himself was a man as indicated in Matthew 9 and all throughout the gospels. He’s the proof of what our Father wants—the example. And the world would be a much better place if we would adopt such humility and seek reconciliation through forgiveness.

But if you wanna keep believing that Trinitarian lie (“Only God can forgive sins”), then by all means, ignore the words of Yeshuah and his apostles.