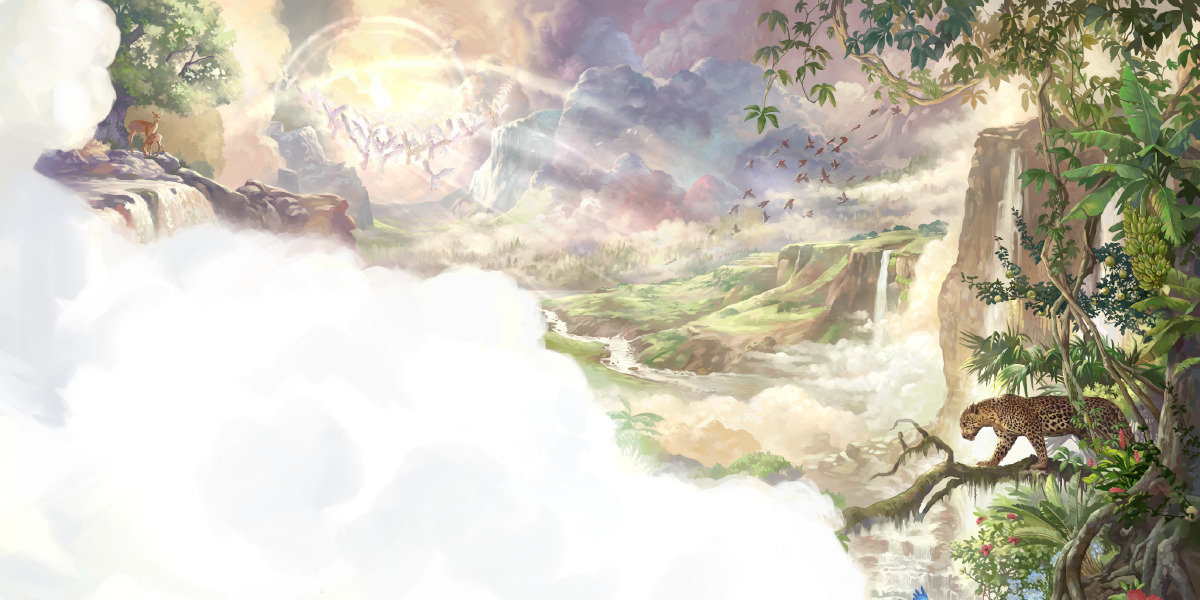 Should followers of Rabbi Jesus--the Messiah and son of God--exclude meat from their diets? Didn't Jesus himself eat meat? Do laws from the Old Testament that restrict our diet to certain things matter any more? Doesn't God allow us to eat meat? These questions, and perhaps some others, will be answered in this series. This first segment is a very basic introduction to only some of the issues at hand. God willing, other installments will be more thorough. At this moment in the study, it should suffice the reader to know that I believe a meatless diet is the most consistent Kingdom diet for disciples of Yeshua (Jesus) for at least a few reasons: the Edenic paradise serves as the model for the future of mankind; prophecy concerning the present Kingdom of God, and the still-future state of mankind in the New Heaven/ New Earth, clearly indicates that, ultimately, disciples of Yeshua who are commanded to be peacemakers shouldn't harm God's creation; various prophets proclaim God never commanded the sacrifices, therefore eliminating any justification for meat consumption--present and future. Ultimately, those called disciples should accept the fact that any concession toward mankind isn't the perfect will of God. Therefore, we should seek to discover and live in the will of God, not God's concessions of man's weakness.

I'd like to begin by looking at a couple of statements that will be invaluable for helping us interpret verses. I think that unless we have this information, our reading and understanding of scripture will be hindered. If this offends you, because you hold to a "sola scriptura" view, then I assure you that you'll at least understand where I'm coming from by the end of this study, regardless of whether your agree with me or not. Our first quote is the following:

Remember capillaries? Very tiny blood vessels that provide every last bundle of muscle fibres in the extremities with a supply of oxygenated red blood cells. Where does the rationale come from that suggests that meat has ‘no’ blood in it? Research shows that Approximately 60% of blood is lost at sticking (bleeding), 20-25% remains in the viscera (in spleen, liver, kidneys, etc.), while a maximum of 10% may remain in carcass muscles (the 'meat'). Different stunning methods may modify these proportions, (electrocution, stun gun, CO2, etc.), the method of bleeding, and the condition and position of the animal at the time of slaughter. Electrically stunned sheep lose more blood than those stunned with a captive bolt, but they also have more ‘blood splashes’ (petechial hemorrhages) in their carcasses. The Jewish (and Moslem) ritual slaughter methods, which bleed without first stunning the animal, claim to reduce the blood left in the carcass to a much lower level, because the heart is still pumping, and thus the exsanguination is more effective. But blood (albeit a small amount) is always present in the meat.[1]

In this quote, Timothy Sly, Epidemiologist, relates a fact that's essential if we're going to understand the Torah: "But blood (albeit a small amount) is always present in the meat." A small amount is still an amount; the implications of this are massive.

In Genesis 9, we read the following:

And God blessed Noah and his sons and said to them, Be fruitful and multiply and fill the earth. The fear of you and the dread of you shall be upon every beast of the earth and upon every bird of the heavens, upon everything that creeps on the ground and all the fish of the sea. Into your hand they are delivered. Every moving thing that lives shall be food for you. And as I gave you the green plants, I give you everything. But you shall not eat flesh with its life, that is, its blood. And for your lifeblood I will require a reckoning: from every beast I will require it and from man.[2]

This statement, "Every moving thing that lives shall be food for you. And as I gave you the green plants, I give you everything. But you shall not eat flesh with its life, that is, its blood" is usually taken to mean that God gave mankind a universal meat allowance as a sort of concession. Usually, it's thought that Noah and his family needed to eat the animals since no adequate vegetation had grown on the earth. Torah obersvant people like those in the Hebrew Roots movement notice that Noah was commanded to take seven of the clean kinds of animals on the ark, claiming that Noah not only knew these were acceptable for religious, ritual sacrifice but also for consuming. This eventually is codified in Leviticus 7:27; 17:14 and Deuteronomy 12:16. Here's Leviticus 7:23-27 from the KJV, and other verses where these clean animals are "sanctified" for food and ritual temple worship. Here's what's said concerning the food aspect.

Speak unto the children of Israel, saying, Ye shall eat no manner of fat, of ox, or of sheep, or of goat. And the fat of the beast that dieth of itself, and the fat of that which is torn with beasts, may be used in any other use: but ye shall in no wise eat of it. For whosoever eateth the fat of the beast, of which men offer an offering made by fire unto the LORD, even the soul that eateth it shall be cut off from his people. Moreover ye shall eat no manner of blood, whether it be of fowl or of beast, in any of your dwellings. Whatsoever soul it be that eateth any manner of blood, even that soul shall be cut off from his people.

It's explicit here that consumption of fat and blood is prohibited. In chapter 17, we see this:[3]

Here, we see a prohibition against eating blood, but this time with more explanation of what's supposedly meant. The person who kills the animal and wants to eat it "shall even pour out the blood thereof, and cover it with dust." This bleeding is part of what's called "Kosher." It's believed by many that this makes meat consumption acceptable. Yet, this disagrees with our modern knowledge of epidemiology as related above in that quote: "But blood (albeit a small amount) is always present in the meat." Nevertheless, because it's insisted that all of scripture is inspired and there can be no contradictions, I'm told that "The command is to drain the blood. If we do that, it's clean." In other words, because people are told to believe the Bible above all else no matter what (based on our ideas of "inspiration"), no other facts--despite contrary evidence--will change their minds. But I'd still like to ask my meat-eating friends the following questions: Did God know trace amounts of blood remained in the meat, or not? Why wouldn't "trace amounts" of blood also be part of a prohibition to consume blood? It's still there! If you answer that it doesn't matter, then you've created the contradiction. I don't believe in contradictions. Therefore, if there are trace amounts of blood in the meat, then it seems God really meant what he said in the first place: "Don't eat the meat with the blood in it." This means that we're likely misunderstanding God's statement to Noah, which means that there are issues with things we see in Torah. I'd suggest men are contradicting God and have given us doctrines and commandments of men.

Besides, if we can at least agree that if God allowed meat to Noah and his descendants as a sort of concession, that proves it isn't the ideal. And we should all strive for God's ideal plan in our lives. Shouldn't we?

Before we move on, I'm going to quickly address the notion of ritual sacrifices. Though these things will be looked at in greater detail in later studies, we'll understand that at this moment, we assume Noah both sacrificed and ate the animals allegedly sacrificed to God.

Gentiles and the "New Testament"

Stubborn Gentiles refuse to listen either way. They think since the death of Christ, we're free to eat all things--even the "unclean animals." Usually, the majority of Gentiles are listening to Paul for this allowance. However, if we look closer, we see something remarkable. In Acts 15:29, James gives a judgment that Gentiles must also abstain from eating food with the "blood" in it. James said the following applies to Gentiles who accept Christ:

That ye abstain from meats offered to idols, and from blood, and from things strangled, and from fornication: from which if ye keep yourselves, ye shall do well. Fare ye well.

Already, we see a restriction on Gentile diet that's at least somewhat reflective of Mosaic law. This is after the death, burial, and resurrection. Granted, we haven't explored Paul's epistles in light of James' counsel. These things will be explained as we move forward.

As we continue our study, we're going to learn that the restrictions here related to "meats offered to idols," "from blood," and "from things strangled" are, in reality, strict prohibitions against meat eating altogether in our New Testament. Not only this, but we'll be better informed on ritual animal sacrifice and supposed meat allowances in the Bible. This will provide insight as to the nature of the Kingdom of God and the true character of the Messiah himself. All of this will help us have a better understanding of Paul's allowances for his Gentile converts and the implications of this controversy. You can see there are several, tangled questions. We'll start first in Genesis and move forward from there.